Well a couple of weeks ago, we were at a party, the caterers were making a massive paella and this got me thinking…..Mmmmmmmm, seafood paella on a windy blustery night !! Don’t worry about a paella pan, a good size frying pan and some good even heat dispersion is all you need.

So from the shop we got some prawns, baby squid tubes, scallops and pipi’s. To a pan of simmering chicken stock we added the prawn shells and the squid off-cuts to give it a little fishy flavour. The pipis meanwhile, were soaked in plenty of fresh water to clense themselves. Finally, a small pinch of saffron threads were steeped in warm water giving off a fantastic orange colour and that’s the prep work done. 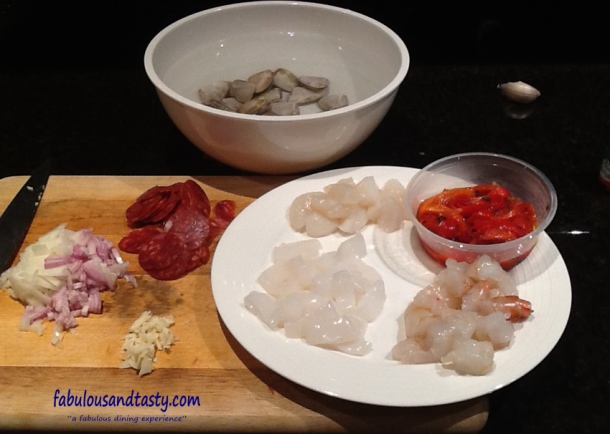 In the frying pan, we sauteed thinly sliced spicy chirozo sausage in a good glug of olive oil rendering out some of the fat. Finely chopped onion and garlic was added and fried till translucent. A cup and a half of sushi rice (for the two of us) got added to the pan and fried again till translucent, probably about 8-10 minutes on a medium heat.

The simmering chicken stock and saffron water was added and the rice cooked for about 10 minutes, stirring occasionally as the bottom part was cooking faster than the top and season as required. Finally, a last ladle of stock and a lid went onto the pan. After about 10 minutes, with the rice almost done, add the seafood, and press the pipi into the rice, careful not to move the rice. Cover and let a little steam generate in the covered pan to cook the seafood. A few minutes before the end, add cooked, peeled red peppers and a sprinkling of frozen peas. 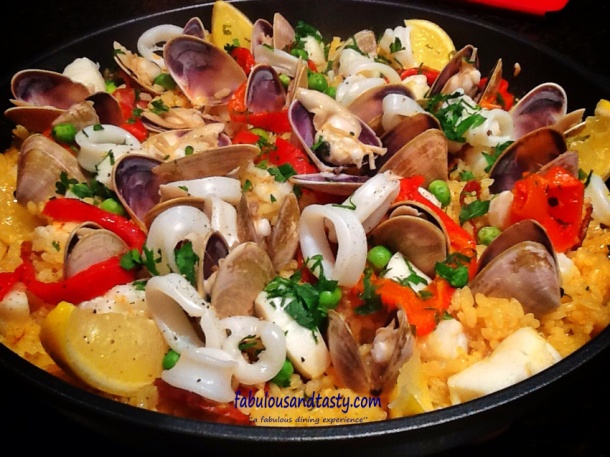 If you need, drizzle a little stock around the edges, but when finished, the rice should be dryish and have formed a little crust on the bottom. Garnish with lemon wedges, parsley and dive in !